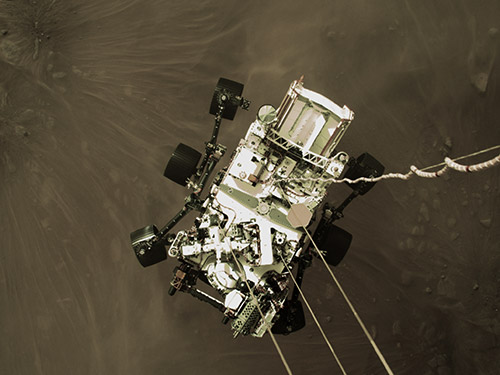 On February 18th, 2021, after a journey of nearly 471 million kilometres (292.5 million miles) NASA landed another rover on Mars. Her name is Perseverance, and her primary mission is to look for evidence of past microbial life in the ancient lake bed and river delta of Jezero crater.

Perseverance landed at 20:55 UTC. The lander hit the Martian atmosphere at speeds of approximately 19,300 km per hour (12,000 mph) and after a harrowing, white knuckle, seven minute decent, the long journey came to a safe conclusion with Perseverance being gently lowered onto the ground via sky crane (pictured).

She joins the Curiosity rover, which has been exploring Gale crater since August 6th, 2012, some 3,700 kilometres (2,300 miles) from Jezero.

Perseverance is the largest rover to date, and she's the first to be equipped with a set of microphones. Previous attempts at sending microphones to Mars failed (one lander regrettably crashed, another carried a microphone that was never turned on), but with Percy's successful landing, we'll be able to hear the Martian wind, and maybe even saltating sand bouncing off the rover, for the first time!

The mission includes a lot of firsts. Perseverance will drill into the Martian surface, collect samples of rock and soil, and store them unspoiled in titanium tubes. Future missions are planned to retrieve these tubes and bring them back to Earth for analysis using the latest, state of the art technology to aid in the search for signs of life.

Strapped to its underbelly, Perseverance is also carrying Ingenuity. Ingenuity is a small helicopter, weighing in at 1.8 kg (4 lb). The helicopter is mainly a proof of concept, hoping to achieve a total of five flights during its operational window on Mars. If successful, it will mark the first time in history an aircraft has taken flight on another planet, and will serve as a foundation for future flight-enabled missions to Mars.

I find astronomy and space exploration to be fascinating. Space offers us infinite mysteries, countless worlds to explore, and endless opportunities to learn something new about our place amongst the stars and the nature of our universe! Space exploration constantly pushes the boundaries of technology, imagination, and collaboration amongst nations, and I think it is the epitome of human curiosity, ingenuity, and perseverance.

The descent as seen by the Mars Reconnaissance Orbiter.

Congratulations to NASA and everyone involved in the project! This feat is nothing short of inspiring.

If you'd like to see a simulation of Percy's landing, take a look at NASA's Eyes.

If you'd like to read more about Perseverance or Ingenuity, check out the Mars 2020 Rover site and 6 Things to Know About NASA's Ingenuity Mars Helicopter.

It would be nice if similar funds would be assigned for the exploration of our planet - e.g. deep oceans are as mysterious for people as the red planet 🙂