The web version of the scrawls continues in the background. In the mean time, I've been working on a little something, for which I've just received some cover art. I'm excited, so here's a little preview of what's to come! 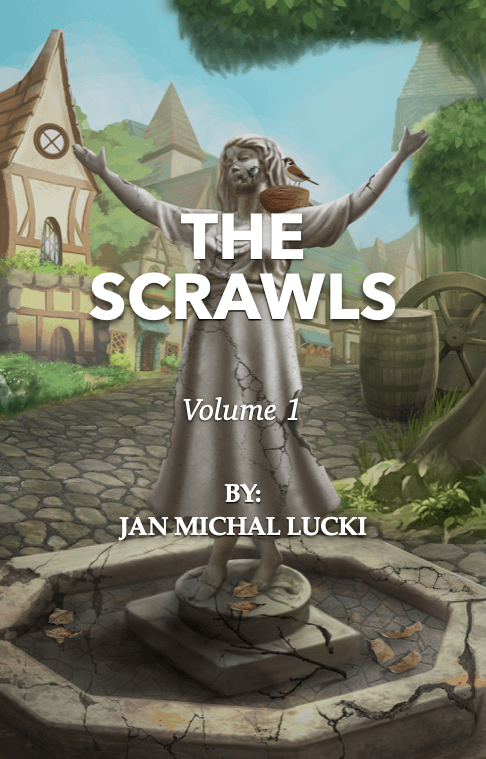 It's been over a year now since I started The Scrawls. On August 9th, 2021, I started writing them regularly. One scrawl every Monday, Wednesday, and Friday. Though I stumbled and fell behind once in a while, I always caught up.

Between August 2021 and August 2022, I wrote 145 individual scrawls, for a total of 29,187 words. I also completed a short story I'd been working on, on and off, for years, and continued to work sporadically on my novel. I'm quite happy with that amount of progress, considering I also have a full time job.

In retrospective, the Scrawls was an experiment that both succeeded and failed.

On the former end, it's kept me writing. My day job uses much of the same creative energy as writing fiction, and before starting this exercise, I often had big stretches of time during which I wouldn't do any writing at all. I still occasionally struggle to motivate myself to write, there are too many distractions, but I do find it to be a whole lot easier now to just sit down and write.

On the latter end, I don't think anyone has really read any of these scribbles of mine. A few friends and some family. I don't know if they're any good, or engaging. They are just meant as a writing exercise for me, but I do put effort into each one, and it would be nice to share that, somehow!

So where do I go from here? That's a good question.

I'd like to try and increase readership on this blog. That means I need, first of all, content people want to read, and second of all, a way for people to know that this content is here. I have a few ideas in this respect, so stay tuned!

Earlier this month, on August 9th to be specific, the Scrawls (the Monday, Wednesday, and Friday variety) turned 1 year old. I've been meaning to write a retrospective on the experience.

This isn't it, but I will write one! I just have to think on it a little.

The Beginning of the End

It begins with The End.

A Lot of Fragments

I've not posted a blog entry in a while, but the scrawls are still being updated! Since I finished Into Namarhel, I've mainly been posting individual fragments, with a few exceptions.

The latest scrawl is simply titled The Meeting, but there are a lot more there if you just scroll up.

I really enjoyed writing Into Namarhel in the way of the scrawls, bit by bit, scene by scene, so I might pick up one of the fragments I've posted since, and turn it into a story. Into Namarhel had a rough outline, which helped guide me some, so I'm a little curious to see where a true stream of consciousness story written in this way would go! I am (mostly) a discovery writer, so I'm looking forward to the process!

It's been some time since I last posted a weblog. I've been keeping busy. I've been quietly adding scrawls, and I'm finally caught up. In the last month I've added quite a few, so I won't list them all here. I'll just highlight the latest:

Into Namarhel is finished. It's been a long journey, and I'm really happy that this story is now out there!

There is also Tick, Turn, Count, Stop, and The Serendipitous Hunter as fragments, amongst others.

Finally, I completed a beta version of a short story I've been working on for nearly three years, and submitted it to a critique website for some feedback. I received a very positive response! There's a few areas I'd like to improve based on that feedback, but pretty soon I'll have a go at submitting it to some markets. It's been a while since I've submitted a short story anywhere, and I'm excited to give it a go again!

A Rejig of Sorts

I've been working on my DynamoDB ODM Spark.

I use DynamoDB on this blog, and Spark is my ODM. The ODM makes it easier to interact with the database and its contents programatically, but Spark is still a very nascent library and its features are still limited.

I've made some critical updates to Spark. More updates are still sorely needed (I've raised one issue on the repo, but there will be more), but I've done enough now that managing scrawls going forward will be much, much easier.

The only problem is the scrawls were previously hardcoded in the templates, and now I need to transfer all of them into the database. For the time being, you may notice the scrawls are missing.

Not to worry! They'll all be back soon, and we'll get right back on the road.

It's been a busy few weeks! My next short story is beta ready, and I have submitted it to a writers' website for critique. I'm looking forward to the feedback, maybe some final edits, and finding a place to share that story.

Into Namarhel is now close to its conclusion, so spoiler warning! To read Into Namarhel from the beginning, start with No Way Back.

Last week I went on a lovely holiday to Andorra. We learned to ski, battled with gravity, met some great people, and ate a lot of good food. Unfortunately I let things fall behind a little here on the old weblog.

I've done some catching up this week. I've written two new parts for Into Namarhel: Act III, and have three other parts that I uploaded before I went on holiday, but never mentioned here in the blog. These are in order:

I've got four new scrawls that are part of the Fragments section as well. These are:

I'm still two scrawls behind, but these will follow soon!

To read Into Namarhel from the beginning, start with No Way Back.