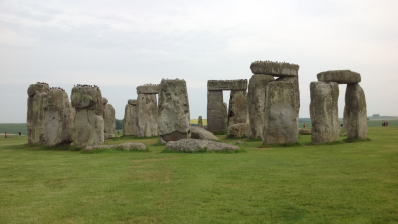 I visited Stonehenge the other day. As one might expect, it's an enormous tourist attraction. There were hundreds of people there even in the middle of the week, an hour from closing. I didn't think I'd have the opportunity to see Stonehenge anytime soon, but I was nearby, in the city of Bath for two days, and Stonehenge was just an hour away. How could I pass up the opportunity?

I was somewhat worried, however. I expected the ruins to be fenced off. I expected the view to be akin to looking through bars into a prison cell. The way they'd described tourists being discouraged from getting close to the stones, I expected the fence to be topped with a swirl of barbed wire. I was happy the stories had been exaggerated. Stonehenge was only cordoned off, the rope being no higher than a foot off the ground. The view was completely unobstructed. The stones were impressive, to say the least, and I couldn't help but wonder about the people who'd raised them. Even in the car upon approach, with Stonehenge looming in the distance, I was filled with a sense of awe.

Seeing Stonehenge up close in that field of grass, accompanied only by the wind and the birds perched atop the stones, I realized that these were the living, breathing ruins that still remembered who they were, that I longed to see. I walked back to the car glad that the area had been cordoned off. All of that wonder, the grandeur and mystery of Stonehenge, would have been lost had hundreds of people been standing around snapping photos between the ancient stones. It is a place I highly recommend visiting.