Lie vs Lay, and Lied vs Laid: The Ultimate Guide

We'll also cover lies vs lays, lying vs laying, and whether you should ever use layed. 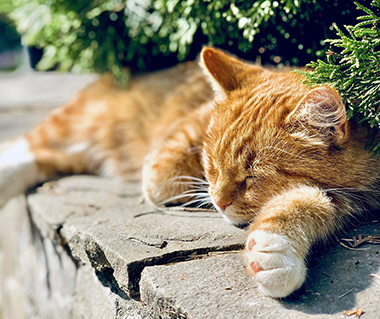 A cat lying in the sun.

Want to skip straight to the breakdown? Click here!

English is a strange and beautiful language, full of quirks and mysteries. The pronunciation of English words often not being representative of their spelling is one such quirk. English spelling started being standardised in the 15th and 16th centuries, likely in part due to the printing press. Around the same time, the spoken language was changing rapidly due to population shifts, foreign influence, local dialects, and even war. This series of changes is called the Great Vowel Shift. The pronunciation changed significantly, but the spelling didn't adapt to match.

From time to time, as I'm writing, I'll use a word I'm not convinced I'm spelling correctly. The word lie, as in lying or resting in a horizontal position, is one of them. I can never quite remember the correct spelling based on the subject, object, or tense I'm using at the time. Is it lied, laid, or lay on a surface? I scratch my head, and Google becomes my next port of call. It turns out I'm not the only one asking this question, and the answer isn't very straightforward.

I concluded that the best way to make this to stick in my head, so I never have to Google it again, is to write my own guide for the proper usage of lie vs lay, and all the other variants: lied vs laid, lying vs laying, the enigmatic layed, oh, and lain too.

So what’s the correct usage of all these words? Below, I'll examine each variation and provide ample user friendly examples. All names, places, and events in these examples are fictitious, and no relation to real people, places, or events should be inferred!

1. Lie as a noun. A false statement. Something untrue.

2. Lie as a verb. The act of saying something untrue.

Don't trust Howard, he will lie.

3. Lie as a verb. To put down into a resting, horizontal position.

William, you look unwell, you should lie down.

Three different uses, all the same spelling! You could say "I lie all the time," and it can mean two different things. Lie, the verb, is intransitive. Simply put, the subject (William, or yourself) engages in the specified action. So when do you lay?

4. Lay as a verb. To put something down into a resting, horizontal position.

Rachel, it's late, you should lay down the book and go to sleep.

Hold on! Isn't that the same as the definition of the verb lie? Not quite, the key difference here is the object of the sentence. Rachel is going to lay down the book. This is a transitive verb. An easy way to remember this is with lay, the subject is always acting on an object. Here are some other examples:

I will lay down the hammer once I'm finished.

5. Lay as a verb. To have been, in the past, in a resting, horizontal position.

Christopher lay in the hammock.

The past tense conjugation of lie (resting in a horizontal position) is also lay. This can be confusing! The key is to remember that if you're referring to yourself resting, you only lay in the past. If you lay in the present, it means you're acting upon an object.

1. Lies as a noun (plural). A multitude of false statements.

Alfred told us nothing but lies.

2. Lies as a verb. The act of saying something untrue.

Alfred lies all the time, he can't help it.

3. Lies as a verb. To be or to put oneself into a resting, horizontal position.

Jacob lies on the bed.

Jacob lies down on the bed.

4. Lays as a verb. To put an object down into a resting, horizontal position.

The chicken lays its eggs.

Jacqueline lays down the earrings.

This one is pretty easy to remember, as it isn't any different from lie vs lay. Lies is intransitive, Jacob acts upon himself, while lays is transitive, Jacqueline acts upon an object (or objects).

Lied vs Laid (vs Layed)

Elijah lied about his whereabouts.

2. Laid as a verb. To have, in the past, put something down.

Olivia laid her ticket on the counter.

Lied is never used to refer to, or to put into, a resting, horizontal position. Lied always refers to telling an untruth.

Laid is never used to refer to a subject in a resting, horizontal position. Laid is always transitive. It's only ever used when a subject is acting upon an object.

So where does layed fit into this?

3. Layed as a verb. Archaic form of laid.

Sir Edmund layed down his gauntlet.

Your spell checker will probably not recognise layed, because it's not really used anymore. Otherwise, it's used exactly like laid. Should you ever use it? Probably not, unless you're trying to recreate dialect from a few centuries ago.

1. Lying as a verb. The process of telling something that isn’t true.

Caroline is lying about the accident.

2. Lying as a verb. The state of being in a resting, horizontal position.

Conrad was lying on floor.

This is the intransitive verb to lie, referring to the resting, horizontal position. Let's backtrack a bit here to an earlier example:

Christopher lay in the hammock.

What's the difference between "was lying" and "lay" in these sentences? As it turns out, not much. They're both in the past tense, and both refer to the subject being in a resting position. You could say "is lying" or "will be lying" to change the tense to the present, or future, respectively.

3. Laying as a verb. Putting something down into a resting position.

Sean was laying his clothes on the bed.

Laying is always transitive like lay, lays, and laid.

Finally, we get to lain. We've just about covered every use, past, present, and future, so what does it mean to have lain? Here are some examples:

Lisa has lain on this bed many times.

Lisa will have lain on the bed.

Lain is the past participle form of the verb lie (to rest in a horizontal position). A past participle is usually used in the past perfect tense, is preceded by has/have/had, and describes an action that has finished taking place. Laid is commonly used here, but as that always refers to a subject acting upon an object, the correct word to use is lain.

There's a lot to the words lie and lay! For lies, as in false statements, you have lie, lies, lied, and lying. If the subject is performing an action on an object, you have lay, lays, laid and laying, all transitive verbs. Lie, lay, lying, and lain are all intransitive, when there is no direct object to act upon. There is some overlap with the word lay, but the transitive takes place in the present, and the intransitive takes place in the past. Simple? Maybe not, but definitely something that can be learned with a little practice!

As a quick point of reference, here are the examples laid out in tables: