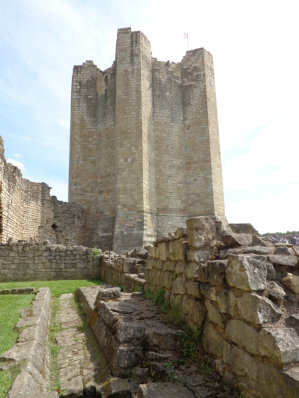 I've been visiting some of the castles around Sheffield over the last few weeks. I've even bought into the English Heritage membership program. They have about 400 sites all around England that members can visit free of charge. The list boasts not only castles, but stone circles (Stonehenge included, though sadly it's far away from Sheffield), monasteries, priories, oratories, monoliths, abbeys, burial chambers, and more, some that are even remnants of the Roman Empire. It's quite an impressive list. There's also a place called King Arthur's Round Table, which is a henge that is believed to have been King Arthur's jousting arena. Being a big enthusiast of all things related to the legend of King Arthur, the prospect of visiting such a place is outright tantalizing.

Pictured above is Conisbrough Castle, which dates back to the 12th century. The castles I've visited so far have been small, at least compared to what I imagine when I hear the word castle. There's usually one surviving keep, where the duke or earl lived, and the king came to visit, and battlements in various states or disrepair. There is some inspiration that comes when visiting ruins like this, but I do find myself wishing the renovations had slightly less of a modern touch. A one thousand year old castle loses some of its character when it's furnished with plastic furniture, a fake fire place, and is awash in concrete. It becomes somewhat of a lifeless husk. I know it can't be helped, and in some cases the concrete is necessary to preserve the remains, but I long to one day walk inside a ruin that still breathes, and remembers what it once was.

Somehow, despite writing fiction set in similar time periods, I've yet to write a story set in a castle. The castles in my stories are always distant, and mentioned only in passing, and the adventures take place everywhere but, but I'm sure I will circle around to them eventually. There are kings in some of these lands whose stories are waiting to be told, and you can't tell a story of a king, without telling the story of a castle. At least, once I do get around to these castles, I'll have plenty of first hand impressions to draw upon. I'll try to hold back on the plastic furniture.